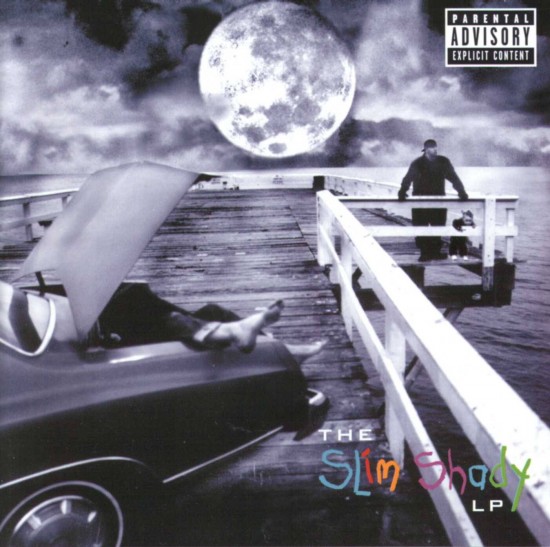 [announcer]
Meet Eddie, twenty-three years old.
Fed up with life and the way things are going,
he decides to rob a liquor store.
(«I can’t take this no more, I can’t take it no more homes»)
But on his way in, he has a sudden change of heart.
And suddenly, his conscience comes into play…
(«Shit is mine, I gotta do this.. gotta do this»)

[Dr. Dre]
Alright, stop! (Huh?)
Now before you walk in the door of this liquor store
and try to get money out the drawer
You better think of the consequence (But who are you?)
I’m your motherfuckin conscience

[Eminem]
That’s nonsense!
Go in and gaffle the money and run to one of your aunt’s cribs
And borrow a damn dress, and one of her blonde wigs
Tell her you need a place to stay
You’ll be safe for days if you shave your legs with an aged razor blade

[Dr. Dre]
Yeah but if it all goes through like it’s supposed to
The whole neighborhood knows you and they’ll expose you
Think about it before you walk in the door first
Look at the store clerk, she’s older than George Burns

[Eminem]
Fuck that! Do that shit! Shoot that bitch!
Can you afford to blow this shit? Are you that rich?
Why you give a fuck if she dies? Are you that bitch?
Do you really think she gives a fuck if you have kids?

[announcer]
Meet Stan, twenty-one years old. («Give me a kiss!»)
After meeting a young girl at a rave party,
things start getting hot and heavy in an upstairs bedroom.
Once again, his conscience comes into play… («Shit!»)

[Eminem]
Now listen to me, while you’re kissin her cheek
and smearin her lipstick, I slipped this in her drink
Now all you gotta do is nibble on this little bitch’s earlobe..
(Yo! This girl’s only fifteen years old
You shouldn’t take advantage of her, that’s not fair)
Yo, look at her bush.. does it got hair? (Uh huh!)
Fuck this bitch right here on the spot bare
Til she passes out and she forgot how she got there
(Man, ain’t you ever seen that one movie _Kids_?)
No, but I seen the porno with SunDoobiest!
(Shit, you wanna get hauled off to jail?)
Man fuck that, hit that shit raw dawg and bail..

[announcer]
Meet Grady, a twenty-nine year old construction worker.
After coming home from a hard day’s work,
he walks in the door of his trailer park home
to find his wife in bed with another man.
(«WHAT THE FUCK?!?!»)
(«Grady!!»)

[Eminem]
Fuck that shit, you just caught this bitch cheatin
While you at work she’s with some dude tryin to get off?!
FUCK slittin her throat, CUT THIS BITCH’S HEAD OFF!!!

[Dr. Dre]
Wait! What if there’s an explanation for this shit?
(What? She tripped? Fell? Landed on his dick?!)
Alright Shady, maybe he’s right Grady
But think about the baby before you get all crazy

[Eminem]
Okay! Thought about it, still wanna stab her?
Grab her by the throat, get your daughter and kidnap her?
That’s what I did, be smart, don’t be a retard
You gonna take advice from somebody who slapped DEE BARNES??!

[Dr. Dre]
Cause he don’t need to go the same route that I went
Been there, done that.. aw fuck it…
What am I sayin? Shoot em both Grady, where’s your gun at?

[gun fires, is cocked, and re-fired]