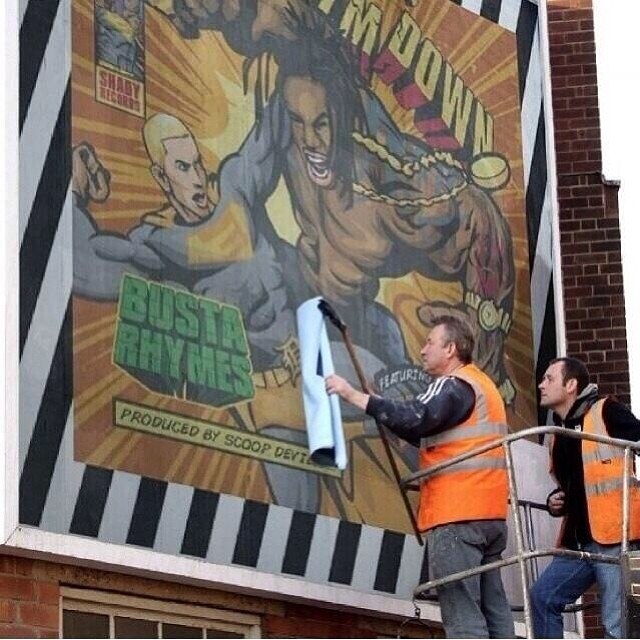 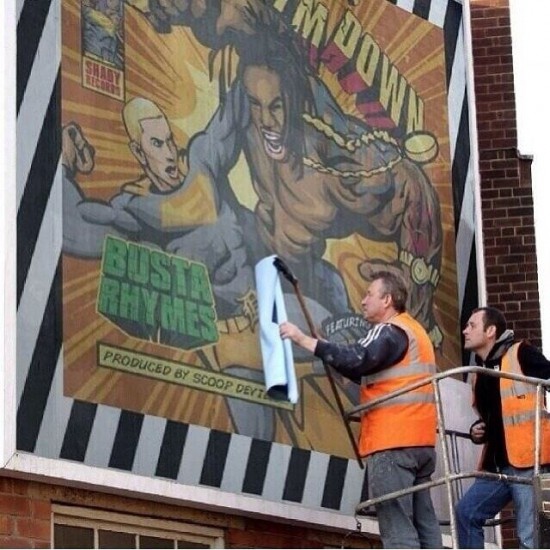 [Verse 1: Busta Rhymes]
Know when the cats get down
Sprinkle the ash, you’ll get your ass kicked, bow
Frown while I shit on your crown
Skip town grounds will appear on the king cash cow
Do I make ’em say ‘Wow!’, strip, ow, bow
I sit with the pound, click, pow
Blow, click, click, pow, click pow
Stop traffic dropping them classics, flip now
Bitches I’m making them skip with thou
Art, you don’t really want that when growl
Let me come (rawr, rawr, rawr) let me come and mop up the knock offs
When I pop off I never stop, cause
What we do? Come through, you better lock doors (PAUSE)
The wolves wanna eat, be by they lockjaws
No need to cook up the coke, you see me chop raw
And if you ain’t have enough
What in the fat fishes of a phenomenal Fahrvergnügen
Fuck is going on? Back with the beat and the raps is callous
Bang on another song, I’mma have these niggas nervous
And clipping they nails and dribbling in wetness
And nibble them like sunflower seed shell, so
See these skills got my weight up heavy like three whales
And I shit on Ishamels ‘til the speakers fell into the weed smell
Nigga your tree fell, see how they Twitter, Facebook, and Instagramming, on email
Talking, I’m sick and I got them shook banging on retail until they cripple
See I cook like I’m slanging a weed sale
And I triple gram and whoop ‘em and drag ’em like females (gasp)
Oh see well, these niggas already know the way that I fuck shit up, minus the details
The case is shut, your bitch remind me of my replacement but kind of an ancient slut
Her stomach down like she was a basement fuck
Swell up this shit like I’m sticking sticks in their gut
So graciously, ungratefully I painfully wake niggas up
Ragdolling these niggas and attacked them like fuck
I’m waiting for the taking while I break niggas neck like a bracelet
It’s kinda like me having a case in the truck and drinking ‘til I’m blasted
All ratchet and racing (crunk) keeping over ‘em blacking
Until I’m leaving ‘em stuck
I got ‘em happier than a child in a park chasing a duck
When I’m chasing a buck it’s funny, niggas be chasing their luck
I be lacing them up like boots when I’m pushing their face in the mud (ahh)
Missiles I fling while I spit live wire, ‘til this shit circling back around
With more fire for me to melt the brake’s surface, back the sound
Light up shit that I toss up quick, worshiping guys look around me
Certain this shit splatters click paint that’ll make ‘em scatter
Shameful the way I shatter, split shit apart it doesn’t matter (rip)
Your head up off your shoulders, bullets bigger than a boulder
Break ‘em and they know that it’s a classic
And the way it’s going you could easily get your ass kicked
See, me and Shady together we’re crazy
Like baking a bomb and them rabies like a pastry bitch, we’re that sick
Cause I’m from Haiti, I’m suggesting you pay me, don’t make me wanna spazz (lalalala)
Like I’m a crazy Israeli, bastards
While I bite the beat up put the sparker in a heater
I’m chopping your foot off now it’s mine and I’m putting my feet up
Back to the hood and off to the whylin’ I’m hoping you protect your child
And I been blacking out so long niggas is asking if the hook is died, naw

[Verse 2: Eminem]
There’s a light contagiousness to this tirade
It just might make you sick
So irate with it my brain is just like a fucking fried egg
Is my mind scrambled? (I’m lit) Yes, narrow minded
But go through such a wide range of this emotion
That my rage has gotta squeeze through it sideways
I just pulled up in Clive Davis’ driveway
With his personal memoir saying he’s bi
Waving a 9 aye, picket sign hate making him cry «rape» then arrive naked
And drive straight through the gay pride parade Yippee-Ki-Yay
Cause here I- wait, did the world just pee on my leg?
And should I take it as a sign? Maybe I’ll take em back in the times (Shady)
Stuck out like a sore thumb, so I gave em the finger
To take the attention away from my stinking face it was bringing
Changed the whole complexion of the game, but just in case you was thinking
An inkling of replacing the kingpin, you’re crazy, you’re wasting your ink then
So if this is any indication of what you may be facing
You better make a distinction cause you fake imitations
Are leaving a bad taste, fuck making a bad impression
That’s the worst impersonation I’ve ever seen and
Who raps nasally, eyes hazily, rhymes crazily
But sounds like [?] flow amazingly, speaking?
Kinda stupid question is that?
Hey Mrs Abraham Lincoln
Other than your husband’s fucking brains that were leaking, how’d you think that play was this weekend?
You ain’t the real Slim Shady, sit your ass down faggot
See me on a ballot? I’m running for class clown
Rich democrat, bitch, so I’m just a candidate
To come fuck up the whole party, me and Flipmode starting a campaign
To have every fucking campus on a rampage
Act my goddamn age? I am eight, so let’s get smashed
And wake up the next day with the room trashed, covered in Band-Aids
Glass ashtray smashed, champagne splashed on the lampshades
But this ain’t up for debate, this is undebatable
Shady for president, ho, don’t make me go take it back to the days of old
Sway and Tech radio when I was taking so much NoDoz and LSD
I almost fell asleep on the wake up show
Fuck you telling me, fools? I was living shock
Raising hell up in shoes when Penelope Cruz was still developing boobs
Me and Bus put it down like a sick pet
You’re fucking with vets dawg, fucking internet bloggers
«I sit in front of my computer all day and comment on
Everything, I’m an expert on everything, everything sucks, play the next song»
Guess if I hopped out your freaking laptop, you idiot prick
With Biggie and kicked the living shit out of you, I’d be dead wrong
Son of God I’m not soft like a wet log, force never gets clogged
I’m so full of self-esteem that I sweat fog
Yes, yes y’all, steady on the left, y’all
Step off of it or you get stepped on soft
Bout as commercial as my fucking leo jet
Jealously’ll get you as green as a Geopet
I can see that you’re visibly upset, dawg
Alert, alert, girl, alert
Once you went into the house of pain hearing a world of hurt so
Jump around, jump, jump, get that ass shaking
Jump around, jump, jump, came to hit you with a fan favorite
But if you too fly for coach better get them get them arms and freaking hands flailing
Jump like Van Halen, and pray for a damn tailwind
More afraid of success than I am of failure
So what does that tell ya?
That on a grand scale I don’t give a fuck about nothing like Stan mailing
His last piece of fan mail before he ran straight into the damn railing