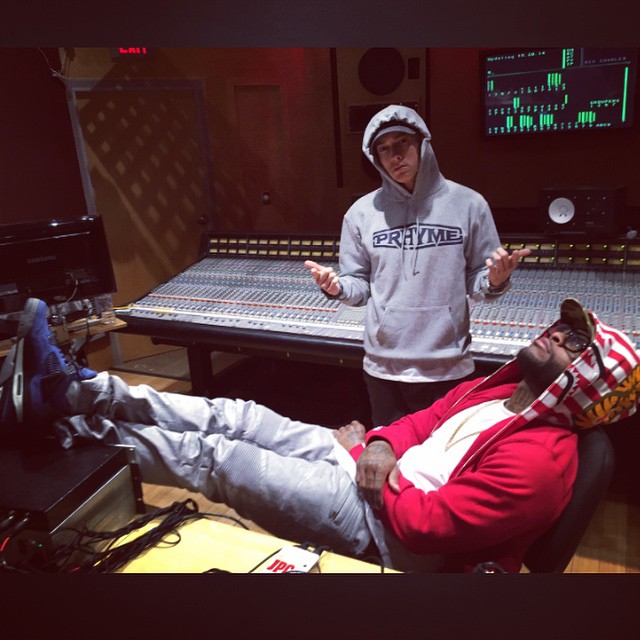 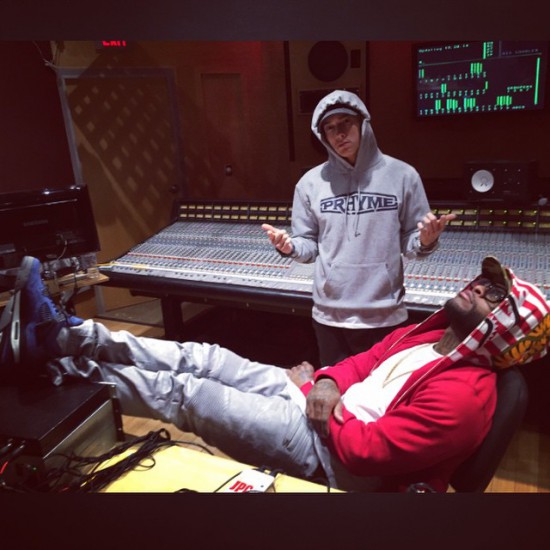 [Verse 1: Eminem]
Got a shady grin, bitch show me those itty-bitty titties again
…[?]..
Bitch you need to go run and go get your friggidy-friends
I’m looking at your bum-stickdy-bum hun, the migidy max, bigidy back
Don’t act wigidy-wack, you can get the fididy-finger, the middle
You little busy bitch [?]
6 o’ clock cravings, stop get your rocks, it’s about to be an unbelieable night
I call it surreal, so mix a lot tape in, hit the next spot to spot my next victim
I’m picky like I missed a spot shaving
Came to sip Vodaka, shit yeah, that little chick is hot but if she got rabies
I wouldn’t give the bitch a shot, I poke her in the rear
But I bet if I lick her, she’d chase me (Haha)
What are you pit, rot, mixed or do you got [?]
Piss off you little snobby little pig snot nose
You think you’re hot? Shit cause you’re in heat, [?]
Then I’m your polar oppisite dog cause I’m colder than popsickle sticks, poppin’ shit
Talkin’ it, walkin’ it, spit rocks then my sick thoughts are about to lick shots
Like this shits hopping, and did-dropping in chocolate-y whip-topping
So whether you’re Hip Hop, Slipnot, Big Pac, Kid Rock, Kris Cross, Rick Ross [?] and flip flops
And I produced the track, so you don’t have to ask when this shit knocks (TURN UP!)
So [?] and I’mma keep on saying all the shit I should be hung for, probably killed for saying
And I probably will, but not until the day I pop a pill again and drop a [?]
And Shady in a coma [?], Mohammad [?]
My brain made me Robin Williams crazy, boy end up with dimensia, rocking with a sadest
But ain’t a sadest, but if the thought is entertaining, I ain’t stopping till be sprayed it
Oh my god, for real man, not again I’m shaking, but before I tie a rope around this nob
If they don’t like it, got a knob they can slob on until — wait I just forgot what I was thinking…
What’s it called again? I’m breaking
Some thing about the balls between my legs and I think I can feel it danglling, it’s throbbing and it’s veining
Wait I think I got it, okay bitch I got you, Robin Williams [?]
Bitch go hang in the lobby unless you came to slob me, come on kemosabi
It’s past time, like your favorite hobby
Cause if the way that I spit shit remains on my dick then she grab me by the nuts and tried to take my sausage as a hostage
Ain’t it obvious? Pretty much a no brainer, or should I say Cobein-er? That shes plain addicted to my dick like Lorena Bobbet
Got a [?] off it, [?] of it, like she took my fucking peins, chopped it, and stuck it up between her armpits
And she begun to swing a [?] knife and paint the carpet, at least that’s what her traier thought is
Cause I made came, saw, conqured, hit it, quit it, and made a [?]
And I always end up giving these bitches some complex
And I don’t mean apartment
So spread your feet apart
And let me see you do some yoga stretches, splits
Now grab this squeezing art
And make me breakfast, bitch, thats a prerequisite
And that’s just to get in this bedroom, bitch
Walked up to that Ke$ha chick (what up?)
Said my name is Booger, wanna catch a flick?
I’ll even let you pick, make her fetch a stick
Bet you if you get this old dog these new tricks
To get familiar with I’ll learn extra quick
Kick a pregnant bitch, oops, I guess the shit
Took an unexpected twist like the neck of the freaking exorcist
Bitch, I said that this mask ain’t for hockey
Hate Versace, Versace, I got Munchausen by proxy
I’m making you sick, don’t pretend you can’t hear me
You deaf, girl, I said you was foxy
I’ll tell a bitch like Bizarre
Bitch, shut the fuck up and get in my car
And suck my fucking dick while I take a shit
And I think with my dick so come blow my mind
And it tastes like humble pie
So swallow my pride, your lucky just to follow my ride
If I let you run alongside the Humvee
Unless you’re Nicki, grab you by the wrist, let’s ski
So what’s it gon’ be? Put that shit away Iggy
You don’t wanna blow that rape whistle on me
(Scream!) I love it
‘Fore I get lost with the gettin’ off

[Chorus: Eminem]
Whatever happens here, stays here
So let’s go off the rails here
Til we get to Las Vegas

[Verse 2: Royce da 5’9]
Whatever happens in my room, it stays in my room like [?] cable
Treat every women in my stable like flavors
Looking like she kryptonite and I get weak after like 7 days
In 7 nights in the days and it’s our Vegas
We rolling [?] and packs, we the lifesavers
She got a boyfriend, I got a toy then
I’ll bring her with me when I show up to her crib waving
And I ain’t tryna be the nice neighbor
I’m so Jay Electronic I’m cut like I’m all out of razors
And all I got is a gun left with a bayonet on it
Next ho froze and it look like I walked in to a jewelry store
With a about a million dollars with your mama
[?] did an ALS challenge, haaaan
I stole that adlib from French, Bad & Evil back at it again
About to get my back tatted again
About to get a [?] a backstabber with an axe in his hand
Sitting on a bike in the sand
If you ain’t been through nothing
Then that shouldn’t mean nothing to you like legs on a crab
If she [?] I keep her pussy purring like the lights on a lamp
We got her so chinky eyed
Look like she been getting high on a flight to Japan
I keep my jewelry on while I’m fucking
Sound like Im shaking up dice in a can
Listen, though this ain’t Christmas I make you my ex miss
If this is my passion
I learn to give those who don’t appreciate my presence
The gift of my absence
I don’t know who you been listening to
Got me fucked up like [?] and the chicken coupe
Bitch, I don’t give a two shits
Bitch, get the fuck out of my face
To make a long story short, I don’t really gotta stand there
And listen to you while you throw a silly tantrum
Even though I have an affinity for witty banter
Starting to feel like foulplay like Billy [?]
Hold up, she misunderstood me
[?]
I knock a nigga face off
Give him the bottom of the nine a baseball (whatever..)
I leave the club with my tab still open
Won’t even get a cab for you and your friend
The only fear I have is of loathing
And I won’t even kick in til we get to Las Vegas